As Delhi government starts work to implement the ambitious Yamuna turnaround plan, attempts are simultaneously being made to address the pollution in the city's three major drains. 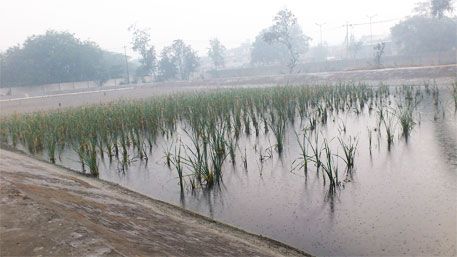 To start with, Delhi Jal Board (DJB) has recently appointed a consultant to prepare a detailed plan for an 8-km stretch of the supplementary drain which will be treated through a network of constructed wetlands.

Senior officials said that a similar network of wetlands was also being planned for Yamuna upstream of Wazirabad. "We are looking at an 8-km stretch of the supplementary drain from Bhalswa lake to Sur Ghat where it joins the Najafgarh drain.

This will be a pilot project which, if successful, will set the trend for cleaning all other water bodies. It will also show the correct way of treating sewage and handling a drain," said an official.

DJB will be using constructed or floating wetlands for treating sewage in the drain, as opposed to a sewage treatment plant (STP). This, said an official, is an inexpensive and natural system for waste water treatment. "Delhi is short of land and it is not possible to install highly expensive STPs at every step. We need to look at inexpensive mechanisms and wetlands will be beneficial in multiple ways," said the official.

The four-pronged approach to cleaning the drain will be through addressing the problem of contaminated water, solid waste, sludge and septage. The supplementary drain, along with Najafgarh and Shahdara drains, contributes the maximum pollution to Yamuna within city boundary. Construction of this drain started in 1982 after the Najafgarh drain failed to handle the flood waters of late 1970s.

At present, a mammoth task of supplementing all three drains with interceptors is taking place. These interceptor drains are expected to ensure no untreated water reaches Yamuna by trapping all small drains and taking the sewage to STPs before discharging.

In 2014, NGO FORCE experimented with the constructed wetland system for treating sewage in a mining pit in Rangpuri Pahari, where it installed a series of natural filters such as reed, coir, bamboo and jute meshes.