Household Water Treatment & Storage : leaving no one behind 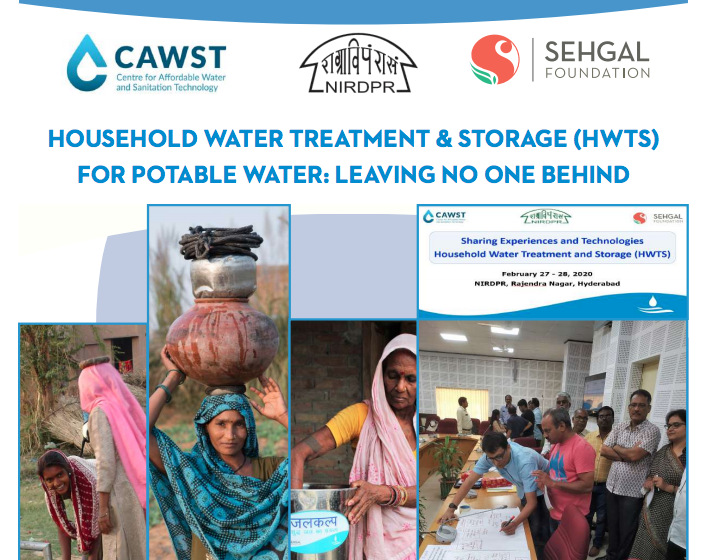 Challenge to Ensure Quality in Drinking Water Delivery Systems India is the second-most populous country having about 17 percent of world’s population, which has just 4 percent of water availability to meet their requirements.

As reported, 81 percent of the rural habitations are being served with 40 liters per capita per day (lpcd) of drinking water from improved water sources. (GoI & NITI Aayog, 2019) Experts and stakeholders in the water supply sector split piped water into two categories:

i) a basic piped water on premises, and

ii) a systemically managed piped water (continuous and safe supply), recognizing that piped water supply in low-and middle-income countries is often sub-optimal in quality and intermittent in supply requiring storage within the households (WHO, 2014).

A meta-regression study (Wolf et al., 2014) has quantified the reductions in diarrhoeal disease that could be achieved through different transitions moving from lower to higher service level categories. It has been pointed out that switching from an unimproved source of drinking-water to basic piped water on premises helps in reducing the risk of diarrhoeal disease by 23 percent, while water supply which is efficiently treated and safely stored in the households showed a disease reduction of 45 percent.

(Figure 1) Figure 1: Drinking-water supply transitions and associated reductions in diarrhoeal disease risks *These estimates are based on limited evidence and should therefore be considered as preliminary and have not been used in the estimation of disease burden.

Source: WHO, 2014. SDG six targets universal access to affordable and safe drinking water, instead of improved water, by 2030. Despite the availability of adequate resources, the ten-year period may be inadequate to transform this into reality given the inherent issues and pace of implementation that the water sector has witnessed in the past.

This however seems feasible in the Indian context with new initiatives such as Jal Jeevan Mission wherein the community-managed water supply systems proposed only need to be supplemented with HWTS to ensure desired quality at the point of use. Centralized Treatment vs. Household Water Treatment Systems The National Rural Drinking Water Programme launched by the Government of India in 2009 envisions enabling access to piped water supply in 90 percent of rural households by 2022. In this pursuit, the Ministry of Drinking Water and Sanitation (MDWS) in collaboration with UNICEF created a Drinking Water Advocacy and Communications Strategy Framework that was launched in 2013 that listed activities, knowledge, and interventions needed at different levels to ensure the attainment of safe and sustained water sources.

At the household level, the framework highlights safe handling and use of HWTS as important dimensions in rationalizing the vision of the program (MDWS and UNICEF, 2013).

• Lack of training and skills to maintain the plants.

• Poor socioeconomic conditions of the families to contribute toward operation and management of community-based water treatment plants.

This policy brief presents evidence-based, experiential and grassroots-driven recommendations emanating from years of on-the-ground experience to improve the access and availability of safe drinking water. Recommendations are divided into the following three categories:

1) Build an Ecosystem for Promotion of HWTS

o Make credible and layered data on water quality available to public (both at source and point-of-use level).

o Support innovators for carrying out location and problem-specific effective innovations on HWTS.

o Exempt Goods and Services Tax (GST) of HWTS systems meant for the bottom of pyramid.

2) Generate Sustainable Demand through Grass roots Extension o Create a people's movement for mass awareness on the importance of safe treatment of drinking water before consumption alongside highlighting the utility and imperativeness of HWTS.

o Build capacities of local village councils to create Water Safety Plans suited to their local contexts and handhold them to implement these plans.

o Identify HWTS systems that can be promoted in quality-affected regions and incorporate strategies for their promotion as part of the water supply programs.

Alongside this, the Ministry launched another report in the same year which recognized that the cost of providing low cost HWTS is half the cost of providing conventional source-based interventions, and that the public sector is bound to recover more than the full cost of implementation from reduced health costs for disease treatment (CSIR-NEERI, 2013).

Despite the recognition of HWTS being an important element in resolving the issues around access to safe drinking water and achieving the vision of safe drinking water at point of use back in 2013, the ambitious Jal Jeevan Mission implementation strategy even in 2020 fails to recognize the importance of HWTS, thus leaving the scope that the intended beneficiaries under the scheme may or may not have access to water that is safe to drink.

HWTS technologies offer great potential in the effective treatment of water contamination and protecting the health, overall development, and productivity of the users (Bartram, 2001). HWTS as an alternative or supplement with centralized treatment has many advantages like sustainability (user is the owner), simple technology, economical, easy to operate and maintain, and reduced chance of secondary contaminations/ infections. It is evident that even in regions that are affected by various water quality issues such as fluoride and arsenic, HWTS is the solution. For instance, the JalKalp water filter (promoted by Sehgal Foundation in Bihar) is a good example of HWTS and is effective in addressing contaminants such as arsenic, iron, manganese, biological contamination, and turbidity simultaneously. However, it is often noticed that the community-based water-treatment systems fail due to the following reasons:

• Lack of awareness among communities on water quality and treatment aspects. • Inadequate resources to undertake timely maintenance and service requirements of the plants.

o Integrate HWTS technology, innovation, and implementation aspects into the curriculum of courses dealing with water management at the household and community levels in the realm of social development, etc.

o Create a network of HWTS promoters, technology developers, and providers from across India on the lines of International Network on Household Water Treatment and Safe Storage.