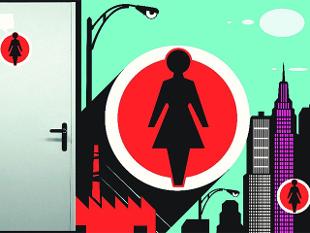 There is a potential threat of contamination of groundwater by using mindlessly toilets since faecal matter contains certain micro-organisms, which would contaminate ground water

With the advent of Swachh Bharat Mission (SBM), the sanitation movement in India has received a fresh impetus. There is an increasing recognition among the policy-makers that open defecation constitutes serious health and human capital crisis. While open defecation remains stubbornly widespread in rural India, the urban India encounters a major problem of waste management both in terms of liquid and solid. Septage from septic tanks is managed inadequately. Improper waste management has led to contamination of water bodies in major urban areas, thereby contaminating the groundwater. Faecal Sludge Management (FSM) needs to be prioritized and India's septage management policy needs to be reviewed promoting a joint ownership of onsite sanitation system.

Over four lakh individual household toilets have been constructed in urban India since SBM was launched. The government has also claimed to have constructed around 80 lakh countryside toilets across India. Like its predecessors, SBM has a lot of focus on toilet construction but the guideline mentions very little on the effective and safe disposal of the fecal matter.

Evidences suggest that there is a potential threat of contamination of groundwater by using these toilets since faecal matter contains certain micro-organisms, which would contaminate ground water. The extent of contamination of groundwater is a contextual phenomenon since it is essentially dependent on the environmental context of the area, namely the soil and hydrological conditions. In case the latrine is not properly lined or if there is breakage in the lining, the micro-organisms seep out of the latrines and are transferred to the ground water, thereby contaminating it. In densely populated areas like urban slums, these toilets have possible threat of contaminating ground water due to persistent soil infiltration. Liquid leaches from the pit and mixes with soil so that pathogenic materials get absorbed in the soil. In order to maintain safe ground water quality, there needs to be a vertical distance of at least 3-4.5 metres between the bottom of the toilet pit and the water table.

The World Health Organization (WHO) has defined risk criteria in terms of the time required for groundwater to travel from the toilets to drinking water facilities. In situations where the travel time is less than 5 days there is significant risk of contamination, if the time is between 25-30 days, there is low risk and travel time of more than 50 days carries very low risk of contamination (INREM Foundation, 2011)
During the 1970's, the surface water and traditional drinking water sources got polluted due to a large number of factories producing synthetic chemicals and with the growing use of fertilizers and pesticides. With the support from few multilateral agencies, there have been large-scale sinking of tubewells for drinking water, anticipating that groundwater would be relatively free of contaminants. In 1969, the National Rural Drinking Water Supply Programme was launched. This $125 Million $ effort resulted in the rapid construction of 1.2 million borewells. After 4 decades, the groundwater exploitation and its related challenges (geogenic contamination led diseases) pose significant health hazards. Therefore, care needs to be taken that the sanitation mission does not lead to another environmental disaster.

In Vietnam, the prevalence of open defecation has decreased dramatically from 44% (1990) to 3% (2012) but the human waste that is generated is not properly collected and treated. Vietnam is incurring an economic loss of 1.3% of GDP due to environmental impacts of inadequate sanitation (World Bank, 2014). Also, the percentage of households using unimproved latrines increases from 26 to 30% over the same period and the prevalence of stunting among the population remains high in the range of 28 to 31% (A better Toilet, 2015).

Certain schemes and policies have been introduced since long by the respective State Governments /ULBs, however, its implementation and monitoring is far from being satisfactory in a number of cities/towns. There is a huge space for improvement in terms of implementation, governance and technology interventions. Under the SBM, which is in a mission mode to build toilets without always adhering to quality control measures and being blind to holistic approach such as the FSM, we are likely to follow the same trajectory, which if unchecked now shall be another disaster waiting to happen.

The supply driven approach in sanitation would lead to mindlessly building toilets without ensuring quality control measures. Most of the times, this leads to poor usage of the constructed toilets. It is imperative that intensifying existing policies of toilet construction will not be enough to substantially reduce open defecation. A more holistic approach to sanitation must be practiced so that faecal matter is safely managed by appropriate treatment, reuse and disposal. Few specific recommendations are:

1. The SBM (Urban) guidelines need to elaborate further about FSM.

2. Construction of toilet needs to take into account the hydro-geological characteristics of the respective regions.

3. Quality control measures need to be undertaken for septic tank construction based on technical grounds so that the groundwater is not contaminated.