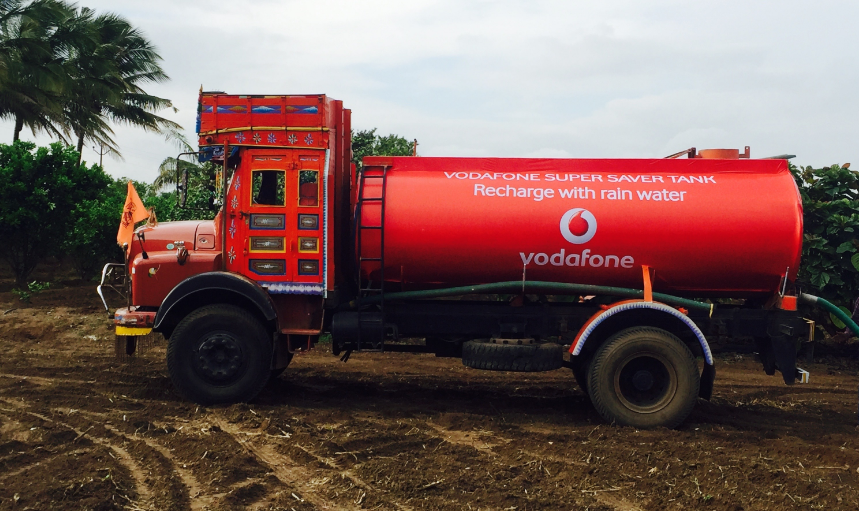 On the New Airport road, in the west Indian city of Pune, five Vodafone billboards, fitted with tanks, are harvesting rainwater.

When the tanks are full, a text message sounds on the mobile phones of a 24/7 collection team and within hours red trucks roll in to collect the water and deliver it to Pimpri Sandas about an hour’s drive away.

The idea is simple, but for the farmers of the drought hit village it is life-changing.

Since they were set up two months ago, Vodafone’s smart billboards have become a lifeline for about 60 farmers who have been left penniless or in debt after four consecutive years of drought.

Dada Navsare, a sugarcane and pomegranate farmer, gets a 2,000 litre tanker of water every day to help water his crop.

“For four years no crops have grown in this village. I have lost hundreds of thousands of rupees and I’ve had to take out loans with an interest rate of 4% every month.

The government used to give us water, but it was a very small quantity and we didn’t get it every day. We didn’t even have water to drink. This year, since the trucks started delivering water, there have been no losses.”

Although Vodafone has made it clear the collected water is only for farming, the farmers also drink it since there are few other options. “We just use it as it is,” says Navsare. “We don’t purify it or boil it.”

The billboards are fitted with a U-shaped aluminium sheet to funnel water through a tube to the tanks which can store up to 2,000 litres of water at the bottom of each hoarding. Each tank is fitted with water sensor technology to alert employees when the tanks are full.

The billboards are serviced by a collection team which transports the stored rainwater to villages in trucks. Every part of the process is funded by Vodafone.

The smart billboards, designed by engineering firm Kinetic, could be used in other regions, says Siddharth Banerjee, CMO of Vodafone India: “While this initiative has been implemented in Maharashtra, we expect this effort to be replicated in other geographies of India.” More than 330 million people across the country were affected by drought earlier this year.

“We are talking to the local government in Maharashtra and in the state of Haryana about fitting many more billboards with tanks,” says Somnath Sengupta, national creative director of Kinetic. “You can give these farmers money, you can give them food, that’ll help them for a while. But what they really need is water.”

In India, increasingly extreme weather has added to the water woes of farmers across the country. In the last few years agricultural cycles have been disrupted by floods and drought in different parts of the country.

Seventy-five per cent of India’s rainfall occurs in the monsoon months between June to September. When there is a shortfall of rain, water sources can dry up before the next year’s monsoon season.

Read full article at: The Guardian