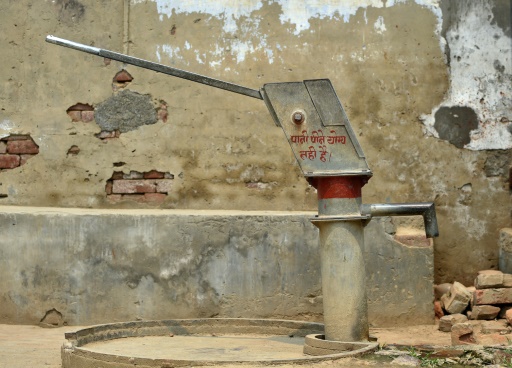 As large swathes of drought-devastated India desperately wait for the monsoon rains to arrive, one village in the dry, hot north is flush with water.

From toxic pollution of rivers and lakes to contamination of groundwater supplies, together with chronic shortages in drought-hit districts, India's water challenges are acute.

In Gangnauli village, residents suspect their groundwater has been polluted by waste from local industries.

"The children complain of stomach pains and skin problems and I fear for their health," Divya Rathi says as she watches her daughter play with buckets of water in her yard in Gangnauli in Uttar Pradesh state.

"We need the government to do something about this," said the 25-year-old, adding she could not afford the expensive water purifiers used by wealthier households.

More than 130 million people live in areas of India where groundwater supplies are contaminated with at least one dangerous pollutant such as arsenic or nitrate, according to the World Resources Institute.

Dharam Veer (L) sits with his disabled son Vineet on a charpoy in the village of Gangnauli, in India's northern state of Uttar Pradesh

Prime Minister Narendra Modi's government has pledged billions of dollars to clean up the filthy holy Ganges river, while efforts are also under way to stop raw sewage and industrial waste spewing into India's waterways.

But researcher Sushmita Sengupta warned it could be too late in some areas where groundwater has long been mismanaged.

"Once the groundwater is contaminated it's an almost irreversible process. Once it's destroyed it's lost forever," said Sengupta, of the Delhi-based Centre for Science and Environment.

Parts of India are anxiously waiting for the annual monsoon currently sweeping across the country to provide relief to 330 million farmers and others.

In India's Gangnauli village, authorities have painted a red stripe on communal hand pumps to warn residents after testing found groundwater was contaminated

But experts say the torrential rains will not solve India's water problems unless much more is done to manage supplies.

Rajendra Singh, dubbed the Water Man of India, said rains will fail to replenish the water table in many areas because unchecked urbanisation has destroyed wetlands and other natural recharge spots.

"It will just be a flash flood," said Singh, who has called for a ban on groundwater extraction for all purposes other than for drinking to allow aquifers a chance to recover.

"There is not enough drinkable water for the Indian people. Without water security there is nothing," said Singh, who last year won the Stockholm Water Prize for his work to boost supplies in villages in the desert state of Rajasthan.

In Gangnauli, authorities have painted a red stripe on communal hand pumps to warn residents after testing found groundwater was contaminated.

India's environment court, the National Green Tribunal, ordered handpumps in the district be sealed, and raised concerns about the health of residents drinking from them.

A sugar factory sits on the edge of the village of Gangnauli, in India's northern state of Uttar Pradesh

Many instead draw water from borewells installed in their backyards. But they fear this groundwater is also contaminated by polluted rivers which have seeped into the water table.

"There is poison in the water," said farmer Dhramveer Singh, 50, who blames his son's severe bone deformities on the water.

"We have also been sensitising villagers about the hazards of consuming contaminated water," Tiwari told AFP, although he casts doubt on concerns residents are falling ill.

Village head Dharmendra Rathi said up to half of its 5,000 residents now received piped water, a situation he said was "way better than what it used to be".

But he said the pollution remained a problem, with factory waste from neighbouring districts still discharged into the rivers.