Indiscriminate Use of Groundwater for Farming 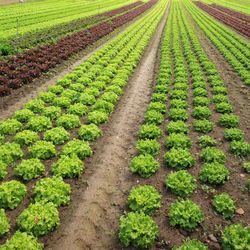 A section of farmers in the dry districts like Jodhpur, Bikaner and Barmer are growing water intensive unconventional crops, using groundwater indiscriminately even in the months of May and June, which is fast depleting the scarce resource rapidly from the region

A study by the International Crops Research Institute for the Semi-Arid Tropics (ICRISAT) based in Hyderabad reveled that crops which require more than 3-10 irrigation cycles like groundnut, pomegranate, olives, wheat and cotton are being grown, aggravating the drought-like situation, which is a common phenomena in the region.

The normal agricultural pattern in western Rajasthan has been Kharif crops — bajra, pulses, guar, jowar, maize, sesame and groundnuts. These crops are grown in the summer season in June and July and require one or two irrigation cycle, which they receive during monsoon without hampering the water meant for drinking. 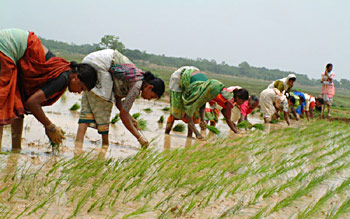 Several blocks in these districts are in the dark zone, which means that underground water table is alarmingly deep. Here digging of new borewells are banned but with no ban on those who already have a boring system is causing a problem. The use of water is also unregulated. At some places it is also noticed that drinking water in step wells, barrier, tank, reservoir and slope is also being used for irrigation.

The scientists have found out that most of these farmers are using borewells, which is a shared resource and is adding to the crises of water for livestock and agrobased industries. "It was noticed that many farmers, who have access to sufficient borewell water, were using it for irrigating water intensive crops during the peak of summers when evaporation is at the highest. In the absence of any regulation, they are abusing the stored water which can be used in the later part of the year for Rabi crops and in extreme drought like situations, for drinking purposes also," said Shailendra Kumar, a scientist at ICRISAT, who is heading a project in Rajasthan.

The water intensive crops fetch more profit than the conventional ones. These farmers use tractors, pesticides and weedicides in large quantities to retain the fertility of the soil, which is not meant for these crops. He suggested that programmes like