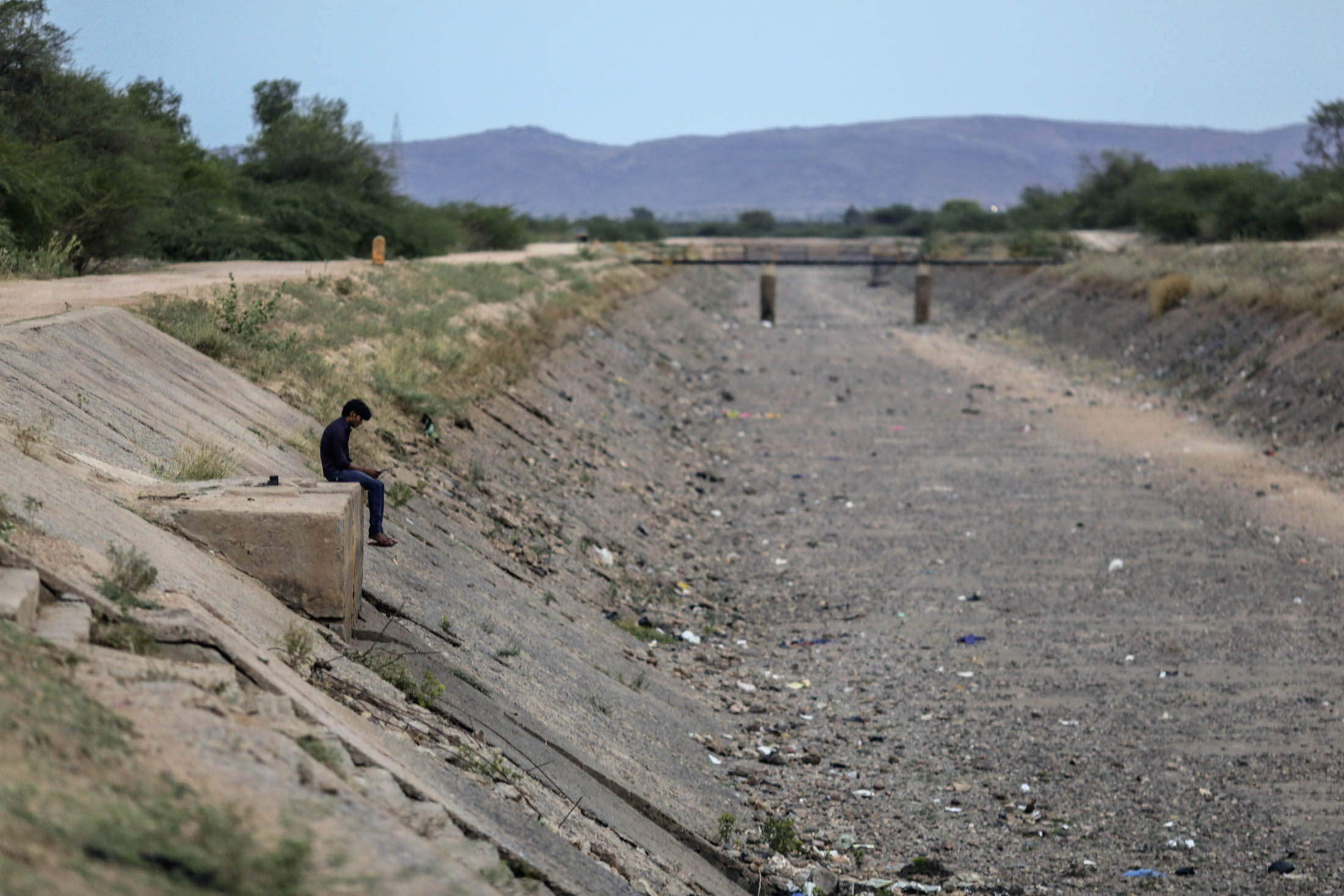 Home to nearly a sixth of the world’s population, India gets only 4 percent of the Earth’s fresh water with 50% of the country in high water stress

On a steamy May morning in Ballari, a former British military outpost in southern India, the handful of workers still employed at Bachal Lal Varma’s jeans-washing factory sit on the dusty street outside with nothing to do.

Though their shift began more than an hour ago, they can’t start work until a water tanker shows up. A well that normally supplies Varma’s business is almost parched, making it necessary for him to spend 5,000 rupees ($74) a day—more than three times his daily profit—to buy water and stay open.

“I will try to continue as long as I have the courage,” Varma said. As he waits for monsoon rains to replenish groundwater, he holds out hope that Karnataka’s state government will soon provide a direct water supply to his factory. 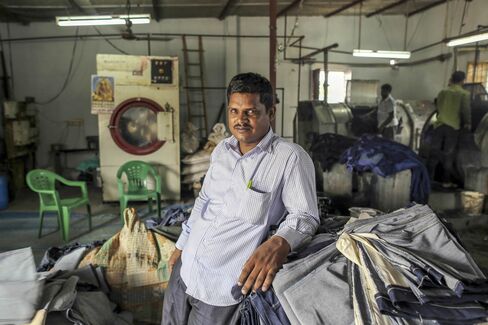 The distress among Ballari’s small garment-makers signals a long-term threat to Prime Minister Narendra Modi’s plans to turn India into the world’s next big manufacturingpowerhouse. Competition for water is only set to grow in the next few decades, increasing costs and risks for companies looking to heed Modi’s call to “Make in India."

India is home to nearly a sixth of the world’s population but gets only 4 percent of the Earth’s fresh water. Already more than half of Asia’s third-biggest economy faces highwater stress. By 2030, demand is expected to outstrip supply by about 50 percent, according to the Water Resources Group.

The dearth of water may deter companies from setting up production facilities in India, according to Anette Andersson, a Stockholm-based fund manager at SEB Investment Management AB who manages $366 million in assets. 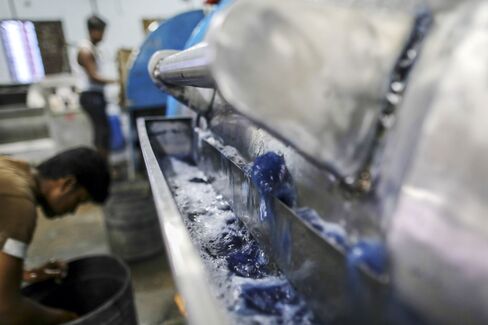 “If nothing else, the risk premium has to be higher,” she said.

Modi’s government recognizes the problem. Last year the federal government required all companies that use groundwater to obtain permission for the first time. In April, Environment Minister Prakesh Javadekar said India would aim to reduce industrial water usage by half in the next five years using the latest technology to reuse, recover and recycle water.

Yet so far, it’s hard to see anything changing. The reasons for this are fairly simple: Water costs next to nothing and enforcement is weak.

“Because you get it for almost free you tend to misuse it,” said Damandeep Singh, director at CDP India, which says it holds the world’s largest database of corporate-related water information using disclosures from companies such as Coca-Cola Co., Ford Motor Co. and Nestle SA. “Appropriate pricing of water is possibly the best way to ensure it is used judiciously.”

In India, water is cheap mainly for political reasons. Politicians don’t want to irk either voters or businesses who contribute to election campaigns.

While individual factories have taken initiatives to save water, not much is happening on the ground, according to Shekhar Chandra, deputy director of the Federation of Indian Chambers of Commerce and Industry, which calls itself the nation’s largest business group. Part of the reason, he said, is “a huge gap as compared to international standards.”

“There’s a lot of scope for improvement and the industry is already working on that,” he said. “From a regulatory side, things have not been tied in to an extent that all industries come on board.” 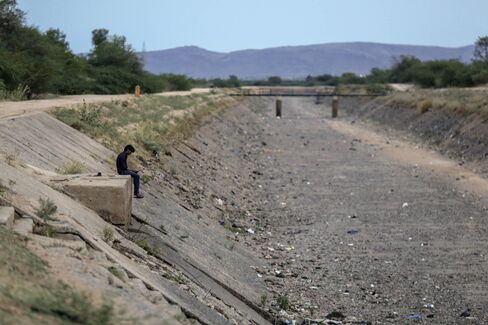 In times of shortages, factories are often the first to get hit. Although industry accounts for only 8 percent of India’s water use, authorities are reluctant to cut the more than 80 percent that goes to irrigation and domestic use.

One of the worst droughts in decades this year prompted Maharashtra state to cut water supply to industry by as much as 50 percent. Mangalore Refinery & Petrochemicals Ltd. shut a crude unit in southern India, and NTPC Ltd. closed down a thermal plant in the eastern part of the country.

While all companies are now required to get approval for water use, local pollution control boards usually only take action against them if villagers complain. In a high-profile case in 2014, Coca-Cola Co. scrapped plans for a $24 million factory due to permit delays after farmers protested.

Coca-Cola has a sustainability page on its India website to show its efforts on water replenishment, reduction and recycling. Kamlesh Kumar Sharma, a Coca-Cola spokesman, declined to comment further. Representatives of Ford and Nestle didn’t respond to e-mails seeking comment. 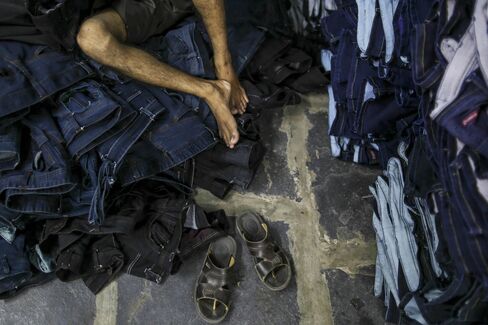 Hindustan Unilever Ltd., India’s largest consumer-goods maker and a unit of Unilever Plc, started a foundation in 2010 to promote water conservation. It has helped conserve 200 billion liters of water so far, according to the company.

“Given the magnitude of the problem, the emphasis must be on sustainable and scalable solutions,” Hindustan Unilever said in an e-mailed response to questions.

In Ballari, which sits between Goa and Chennai in India’s south, villagers once stitched uniforms for soldiers of the colonial British Indian Army. Some 3,000 textile companies now employ about a fifth of the district’s workforce, mainly to make low-cost jeans that are exported to the U.S., Middle East, Australia and Europe.

Varma and other business owners are banking on a new pipeline under construction that will bring more water from a river 10 miles away, eliminating the need to pay for private water tankers.

Even so, the shortages are another reason that the sons and daughters of garment makers in Ballari want to leave the industry, said Hare Ram, a father of three who owns Sony Jeans Washers & Readymade Garments, one of the city’s oldest units.

“I’m not able to scale up my business because of lack of resources,” Ram said. “How can you make in India if there is no water?”