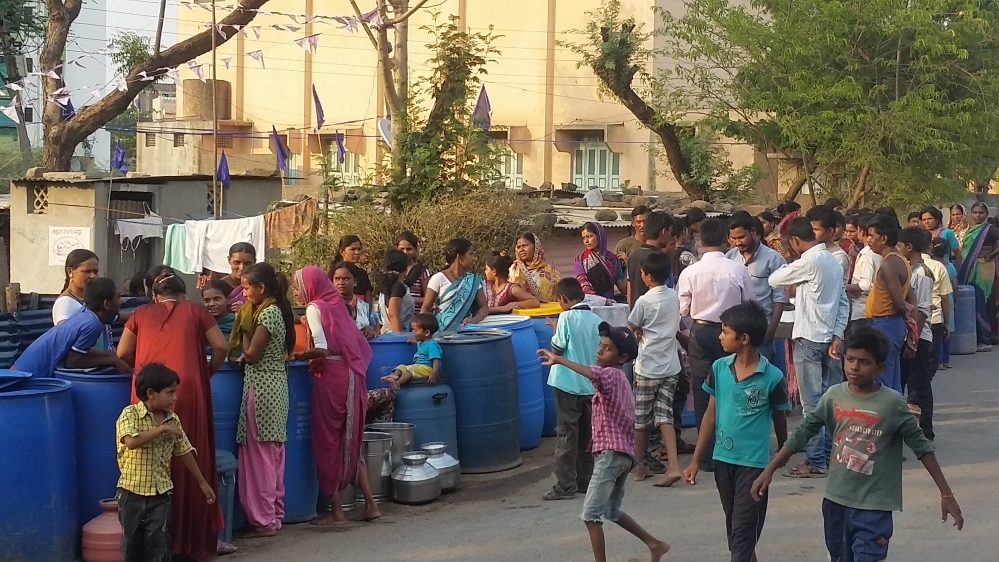 Around 330 million people in India are affected by drought, according to the government.

The Marathwada region in India's western Maharashtra state is badly affected, reeling under the worst drought in decades.

Around 400km from Mumbai, the region has been getting insufficient rains for the past three years.

Temperatures are in the low 40s in some areas, with others only cooling to 38C at night. It is worse for the poor in rural areas, who are forced to drink whatever water they can.

In 2015, the region received only 49 percent of what is considered a normal amount of rainfall.

Some parts received even less: a meagre 35 percent of normal rainfall.

Trains loaded with water are being moved across the country, but farmers' wells are drying up and drinking water is being rationed.

Arriving almost daily, each train brings millions of litres of water to this drought-stricken area. But even this is not enough.

"It's not helped much because we only got it once before in the past 15 days," a village resident told Al Jazeera.

"We're only getting 50 litres per house every eight days, while others are getting 200 every day."

This year's heatwave is making things worse. Temperatures in many parts of India are well above average, with some places reporting temperatures more than 5C higher than would be expected at this time of the year.

The heat is now being blamed for the death of more than 100 people and fears are rising that this could turn into a major catastrophe.

Globally heat waves are one of the largest causes of weather-related deaths.

The situation is particularly hazardous if the temperatures do not drop during the night, because this would normally be when the body would recover from the heat.

The situation in India is exacerbated because many people do not have access to air-conditioning.

Electric fans can only provide relief if temperatures are below 35C, and they have also been shown to accelerate dehydration.

Last year 2,500 people died in a heat wave which gripped the country in May.

For now, the farmers await the monsoon downpours that are forecast for June.