How companies ​use tech to ​solve ​Bengaluru’​s deep water ​crisis 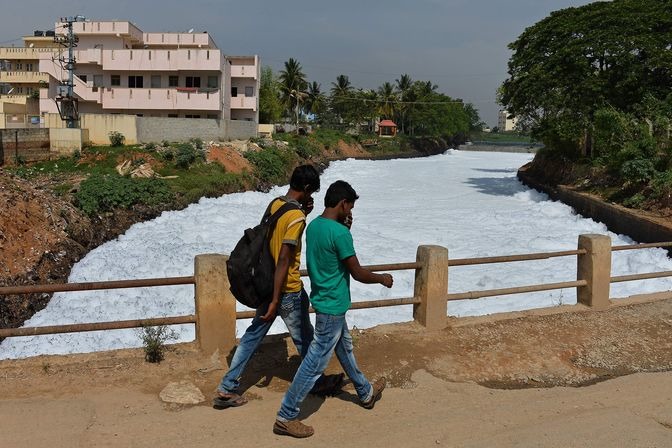 To help manage the water crisis in Bengaluru, innovative water solutions from several technology companies have been introduced to solve different elements of the city's water issues.

Over the past few years, Bengaluru’s water crisis has been manifesting itself in multiple forms, from lakes spewing froth and bursting into flames to residential complexes almost entirely dependent on tanker trucks for water supply.

In its 2016 report, Water Situation in Bengaluru, the Centre for Ecological Sciences at the Indian Institute of Science pointed out that the city had sufficient water but achieving sustainability would depend on political will, a willingness to adopt decentralised models and citizens asserting their right to water. That may well be a work in progress.

True to its identity as a tech and startup hub, Bengaluru has seen a few companies, from startups to multinationals, come up with technology-led innovations to tackle the various aspects of the water crisis.

The app is one part of the startup, SmarterHomes, which uses internet of things to help users track exactly how much water each household is consuming, using a smart water meter.

This solution was a response to one aspect of Bengaluru’s worsening water crisis: apartment complexes buying water through tankers, but not being able to track its use. Shukla and Kasturi Rangan, the cofounder, were colleagues at Wipro EcoEnergy and neighbours. They realised their apartment society was struggling with uneven water supply. “Everyone had to pay a flat fee of Rs 2,100 a month and people were complaining about that,” says Shukla.

The solution, they realised, was metering. But conventional apartment designs made it difficult to track. The duo then came up with wireless meters that would be attached to each water inlet in a home, to monitor flow in real-time and send the data to the cloud, which can be accessed by users via the app.

This meant users could track how much water they were using and if there were any leaks at the residences. Using the app, one can track daily and monthly consumption patterns as well as cut supply to individual inlets remotely.

“With a smart meter, every single use is logged, including the length and quantity of consumption,” says Shukla. When people began to be charged for what they were consuming, they also changed their usage pattern. But the idea, he clarifies, is to curb wasting water.

After the meters were installed, the company says customers have been able to reduce consumption by 35 per cent or more. The product was launched in July 2015 and the company has sold 14,000 units, each priced at Rs 9,500.

With a population of around 10 million, the city of Bengaluru consumes approximately 1.4 billion litres of water a day. However, the installed capacity to treat its sewage is estimated at 58 per cent , with much of that wastewater being pumped into the city’s many lakes. A team of scientists at the Indian Institute of Science in Bengaluru have now come up a solution to tackle this issue, which they say is low-cost and has zero wastage.

Led by Sanjiv Sambandan, an associate professor at IISc who is also cross-appointed at the University of Cambridge, Openwater.in converts wastewater (grey water) to potable water that conform to the specifications of the International Organization for Standardization.

“In Bengaluru, it would certainly help if wastewater treatment is done at the community level. But currently, this practice is not widespread because many existing technologies pose logistical difficulties,” says Sambandan.

Openwater’s device applies an electric field to particles in water, which clusters particles to form big enough entities that can be arrested in a sieve. “You don’t need a fine membrane for this, thus removing that cost. And unlike in reverse osmosis, there is zero wastage of water,” says Karthik Raghunandan, the startup’s chief operating officer.

It uses a plug-and-play model and capacity can be scaled up by increasing the number of devices or modules used, similar to solar panel cells. “Which means that in case one of the stages fail, it will only affect a small fraction of the output,” says Raghunandan. The device can treat 250 litres a day. The team estimates that the low-cost solution should be in the market by next year.

According to a World Bank Study, 32 billion cubic meters of water is lost every year in the form of leaks and thefts, half of this in developing countries.

The water thus lost is referred to as non-revenue water (which cannot be billed or accounted for) and it is a challenge for every government to reduce this. The Bangalore Water Supply and Sewerage Board (BWSSB), with its network of aging pipelines, is no exception to this problem. But over the past few years, it has been able to bring down its non-revenue water by 12 per cent , to 37 per cent , says executive engineer PN Ravindra.

This is partly due to its adoption of technology in the form of a water information hub, designed by IBM and launched in 2015. Called the Intelligent Operations Centre, it provides a digital dashboard that enables the department to track the various parts of its water supply network and generate data using analytics.

IBM: says it began working on the project some years ago with the idea of helping governments preserve natural resources, as well as monitor the quality of water.

“There are several ‘assets’ involved in a government water supply system, such as a pipeline network, meters, service engineers, etc. We wanted to create an information hub that would monitor and connect all these and become a single point for data, so that there is a good visibility of the resource,” says Shalini Kapoor, says Shalini Kapoor, director and distinguished engineer (IoT), IBM Watson. The pilot was launched in 2014 and the final rollout took place the following year.

The system uses automated water meter readers to track use, flow meters to measure the flow and pressure. It also monitors complaints raised by users and service engineers. Billing and revenue have been integrated into the system as well, and revenue projections are also monitored. Dashboards are created using this integration, and analytics reports generated from the data.

While governments in developing countries are conscious about the lack of access to affordable clean water faced by many and has invested money for solutions, these systems are often hobbled by its dependence on human intervention.

“In villages, for instance, the person in charge of maintaining a purifying system might not be easily available when something goes wrong — he might have gone elsewhere after putting his acquaintance in charge who would not know what to do,” says Pavin Pankajan, executive director of AquaSafi.

To overcome this, the Deshpande Foundation-incubated startup has come up with an automated water purifying kiosk, which uses a proprietary RO technology, and sells 20 litres of water for Rs 2.

“We have reduced human dependency using IoT (internet of things), and the kiosks do not require an operator. People can come and collect water anytime,” says Pankajan.

AquaSafi was set up by Chicago-based Kevin Cluff in March 2011, with the aim of building a sustainable business that would provide clean drinking water at a low cost and is thus accessible to the underprivileged.

Pankajan, who has a master’s in water resource engineering from IIT-Bombay, came on board as executive director after meeting Cluff at a conference, where they realised they shared a passion for providing low-cost drinking water.

AquaSafi has set up over 300 kiosks in Karnataka, including in Bengluru.