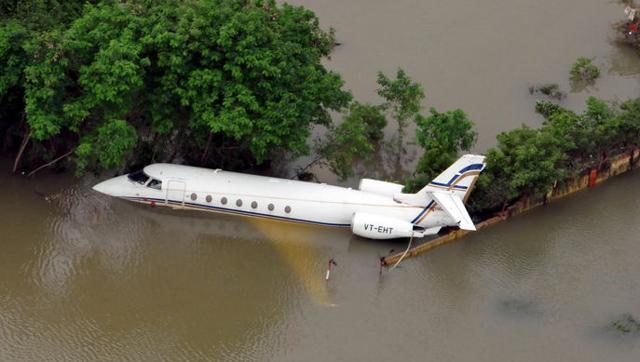 Across India, city after city has experienced floods, while some others live with the fear of impending disasters. In Mumbai, flooding was caused by wrong developments at the Bandra estuary and negligence along the Mithi river, and in Uttarakhand the disaster was caused by unplanned regional development and the unholy nexus between the land mafia and politicians. The Srinagar valley suffers from an unfortunate geographical disadvantage of being the recipient of water from an enormous watershed above the valley.

Meanwhile, in Delhi, the two governments are merrily building on the city’s flood plains, ignoring the ministry of environment, which is supposed to protect the Delhi Ridge and the Yamuna river. Calcutta’s new growth is entirely in the wetland area, creating multiple infrastructure barriers for surface water flow from the mother city, which in any case has a lower elevation than the Hooghly river. In the past decades, Bangalore’s expansion had been at the cost of an elaborate pond system in the sub-region, a majority of the scattered ponds being built upon by land sharks. The Bruhat Bangalore Development Plan came too late, while artificial land values were created by project-driven infrastructure. In other words, all our metropolitan cities have ignored watershed management and environmental planning to their own peril. This is the juncture in India’s urbanisation when thousands of crores are being poured into the urban centres, coupled with a policy shift in the Environmental Impact Assessment in order to facilitate ‘growth’ for easing the sanction process. All these are also ‘Smart Cities’, ‘AMRUT Cities’ and investment destinations for ambitious metro projects and they are identified as new growth centres of our ‘surging’ economy. In the absence of a proper National Policy for Urbanisation, our metropolitan cities are sitting ducks for all sorts of natural disasters. Spineless local planning organisations, which are subservient to their administrative and political masters, are not willing to put their technical know-how on the table, for fear of punishment transfers and mafia-induced pressures.

The Chennai floods show all these problems can surface in other Indian cities. The geography of South India demonstrates how rivulets, ponds, streams and rivers emanating from the Western Ghats flow towards the East to the Tamil Nadu coast. On the other hand, this coast is also highly vulnerable to storms, depression, tsunami and floods. Chennai is one such area where an enormous watershed finally drains into the sea through its rivers and canals. Has any regional planning exercise recognised this primary natural layer on which urban development forms the secondary layer? No. On the contrary, the watershed on the west of Chennai has been the major venue for industrialisation in corridors going up to Kanchipuram further to the west.

Traditionally the sub-region surrounding Chennai had big and small ponds connected by a working overflow system. The water was allowed to spread into fields and thousands of smaller ponds, with the entire region acting as a ‘sponge’ to absorb the excess water, supporting paddy fields and fish farming. These overflow systems and multiple canals finally find their way to lakes that surround Chennai city. Finally the rivers in Chennai absorb this flow.

In Tamil Nadu’s hurry to industrialise, these watershed areas have been ravaged, with all the major industries, new educational institutions, housing estates, etc. coming up in the past two decades. Thousands of smaller ponds and streams have been filled up, increasing the surface water flow manifold. The major tanks are silted and the amount of water flowing into them has increased. This increased run-off has found its way into the city. Unprecedented rain, induced by climate change, has compounded the problem. While the disaster has been caused by nature, the impact would not have been so severe but for the man-made factors.

The second dimension of Chennai’s flood is another man-made (read planning-made) problem. The Adyar river in the south of the original city had a wide estuary and also a wide flood plain. Many areas south of the river have been marshy and low-lying, serviced by small rivulets and canals. Most submerged areas with floor-high water are on this part of the city, including the IT Park and many multinational corporate headquarters, paralysing business not only in Chennai but across the country and outside.

All the swamps, marsh lands, low-lying areas and streams that these big corporations, middle-class housing and slums have built on are inundated as they are at the receiving end of overflowing large regional tanks.